For the past year, the Society for Prevention of Cruelty to Animals in Israel has been active on the social network, operating a vibrant Facebook page. Six thousand fans and members have already joined the Society through Facebook. In recent weeks the Society decided to expand its social networking and invited some of the foremost opinion leaders in the Israeli networks to tour the facility.

During the visit, the opinion leaders were given a tour of the Society and shown the full range of activities undertaken for animal welfare. This included encounters with dogs that had been abandoned and are now waiting for warm homes, petting the cats who are waiting for adoption, and visiting the donkey foal that was born just a few hours earlier, and whose mother is being cared for in the Society’s stable. They also met some of the horses staying in the stable and even had a personal introduction to an eagle who was recuperating from injury in the care of the Society. The guests filmed the event, tweeted on Twitter and posted updates on Facebook, thus helping the Society to increase its hits by tens of thousands on the social network. 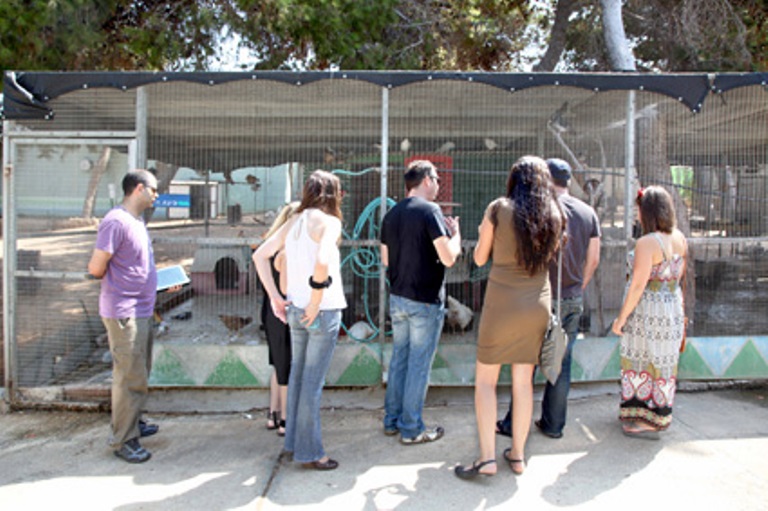 Man’s Best Friend – Also on the Network
Our Facebook members spread the important message inherent in the Society’s activities and help to find adoptive homes for the dogs and cats in the shelter. The members also share their love for animals, chat with each other and the Society on the subjects of animal care and providing help whenever necessary, while enjoying taking part in discussions about their adventures in the world of caring for and raising animals.
Amongst other things, our Facebook members help us find names for the animals reaching the Society. One such instance that had great impact was choosing a name for the newborn donkey foal. Tens of users submitted their suggestions of names for the adorable foal and in the end, the Society’s staff chose the name Golda. This activity was given special coverage by the Israel Today newspaper.

In addition, our Facebook page helped the Society promote the “Not Your Atonement Campaign”, where the Society cried out to put an end to the cruel custom of slaughtering chickens on Yom Kippur and to exchange it with the giving of charity. Some Facebook members joined the Society’s protest demonstration in the HaTikva Market in Tel Aviv, following a special Facebook event to which thousands of members were invited. Facebook members also came to celebrate International Animal Day with the Society to which they had been invited through a special Facebook event. During that festive day the guests enjoyed special deals, benefits and offers for animal care products and services, valuing hundreds of NIS.

Embrace the Society
If you wish to help the Society, you are invited to do so through the social network. This will help us extend our audience of supporters in our Facebook page and raise public awareness of our work. Please enter our Facebook page, invite friends at LIKE and send out articles. All such help will support the Society’s ongoing activities and assist us in finding warm homes for the animals.