Taking part in an educational project, Idan Keynan from California made a presentation and collected contributions for the Society for Prevention of Cruelty to Animals in Israel

For many years the Society’s Department for Humanistic Education has carried out educational activities, in the understanding that the key to building a humane, sensitive and better society lies in the education of future generations. For this reason, we are always very excited to hear about humanistic educational projects taking place in schools and other institutions.

Volunteerism and Social Activity
On this occasion we wish to tell you about an educational project that took place abroad, in which Idan Keynan, aged 12, took part. Aidan lives in Silicon Valley in California. During their studies in the Gideon Hausner Jewish School in Palo Alto, California, the 7th Grade pupils, marking their bat or bar mitzvah, take part in a special project that emphasizes volunteering and philanthropic activity.

During the year, each student chooses one non-profit organization active in an area that is close to his heart, writes a research paper, collects money and at the end of the year, presents the project and donates the money to the organization of his choice.

According to Idan, “I love animals and so I chose the SPCA in Israel for my project. My goal is to prevent suffering in animals, and one of the main problems in Israel is that of the suffering of abandoned animals. In addition, by choosing the Society I demonstrate my connection to the State of Israel”. 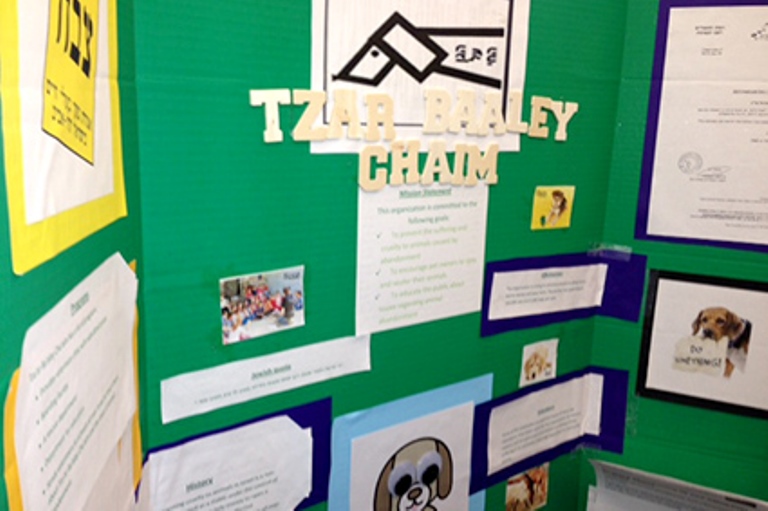 The Finishing Line
As stated, the work on the project commenced with the choice of the Organization, after which Idan contacted us, began to gather information about the Organization and carried out interviews with activists.

When he had completed his research, Idan made a large poster illustrating the Society’s activities and spoke before an audience of his classmates on the topic he had chosen. After that, Idan and his fellow classmates began to collect donations for the various organizations by selling cakes and other snacks, holding a dance party and running activity stations at a Purim event.

Last week the project reached the finishing line and a festive ceremony took place in the school. Each student presented his project and gave the chosen organization the money he had collected. Idan’s contribution of USD 850 will be used by the Society for the puppies’ home, where puppies of less than three months of age, in need of special care, are looked after.

We wish to express our gratitude to Idan for the unique project that he produced and promoted.