Last Saturday my friends and I decided to take advantage of the pleasant weather and unseasonal sunshine, by taking a trip up north. During the day we reached the market in Kfar Kassem, a place I had never visited, and so I was unready for the sights that met my eye.

As soon as we reached the market compound I saw from afar a row of cages and heard strange shouting, such as: “Pedigree Doberman for sale”, and so on. When I drew near, I saw a young man holding a box with four small puppies that were also up for sale. Nearby there were other peddlers offering their wares: rabbits, roosters, parrots and hamsters. I, having been involved with animal welfare for over five years and having worked in the Society for Prevention of Cruelty to Animals for the past two years, have been exposed to sights of serious abuse and neglect towards animals, but I certainly hadn’t expected to see that awful animal market on a day that was supposed to be restful and fun.

Along the way my attention was drawn to a young goose locked into a cage. He wasn’t injured but looked neglected and pitiful. Two minutes later and with NIS50 less in my pocket, the goose was in my car. Following a check-up by the veterinarian in the Society, the goose was transferred to the animal enclosure. There he is taken care of daily and has the added pleasure of a swimming pool.

I wish to point out that there is no harm in the sale of animals and transferring ownership to others, but these things must be carried out responsibly, under appropriate conditions, with extra attention given to the way the animals are kept and looked after. It is important to ensure that the animals are checked by a qualified veterinarian and have received all the necessary inoculations. In the case of dogs, the law requires valid rabies vaccinations and microchips. We in the Society recommend, obviously, to have all cats and dogs neutered. It is unbearable to think about those poor animals being sold for profit, uncared for, as though they were merchandize… 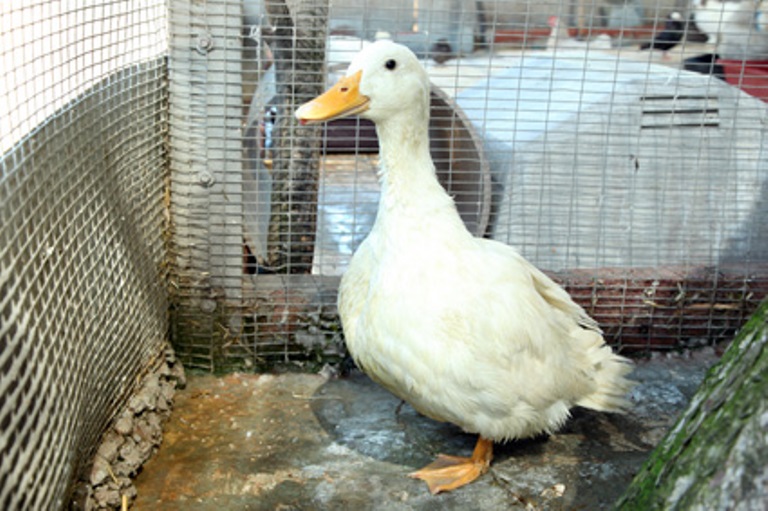 Keeping animals under such conditions as were found in that market, as well as in other markets in Israel, is in total contradiction to the Prevention of Cruelty to Animals Ordinances (Protection of Animals, Possession for Reasons other than Agriculture), 2009. A complaint was filed in the Ministry of Agriculture, who told us that inspections are carried out regularly in the Kfar Kassem market and that the Ministry’s inspectors will return there in the near future. If you come across animals being held under inappropriate conditions, please report the case to the police, the Ministry of Agriculture or give us the details of the case.