The horse in the photo is no longer suffering. She is no longer alive. She was humanely euthanized by the SPCA’s veterinarian. Two bottles of anesthetic material were administered by injection and she was put out of her misery. Yet another case of abuse and criminal neglect has come to a sad and painful close, not before the horse was subjected to terrible agony and suffering during her last few months of life.

Last week a call came in to the Society’s call center from the horse’s owner, who expressed his desire “to get rid of her” since he could no longer take care of her. The owner of the horse pointed out that the horse was in a very bad state but that he was not responsible. According to him, the horse had been given to another person who allowed the horse to reach this state of neglect while she was in his care.

Following our report of the case to the Mateh Benyamin Local Authority Veterinarian, Dr. Hovav Shapiro, he went out to check and see if the horse should be confiscated from its owner according to the Law for the Protection of Animals. The owner expressed his interest in giving the horse to the Society. Dr. Hovav reported her poor condition to us but we did not understand just how bad it was.

Meanwhile, we approached Dr. Zvia Melidenberg of the Ministry of Agriculture, who is in charge of matters concerning horses, and to Gali Davidson, supervisor of the Protection of Animals in the Ministry of the Environment (the two governmental Ministries that are entrusted with the protection of animals in Israel) but they adamantly refused to take responsibility, not even agreeing to undertake the cost of transporting the horse to the Society’s stables. 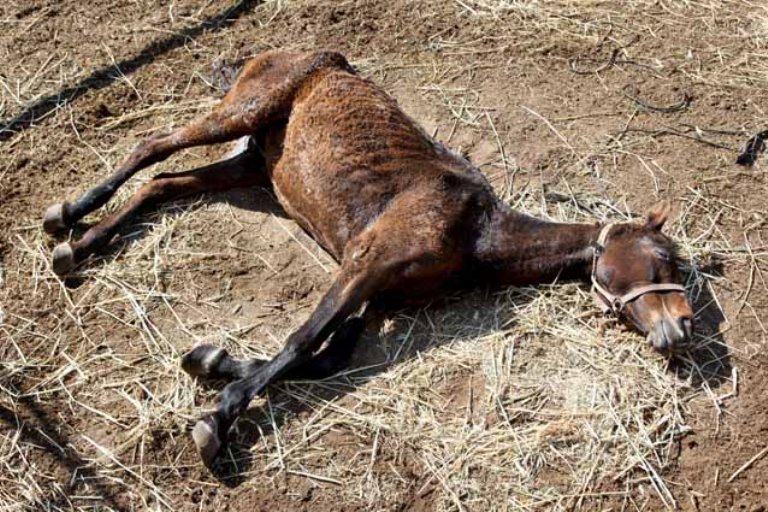 On Sunday morning a horse transport was sent from the Society to the Mateh Benyamin District Council to collect the horse. Unfortunately, they were appalled to see that the horse was in far worse condition than anticipated; thin, dehydrated, experiencing difficulty in breathing, shaking all over and hardly able to stand on her legs. The horse collapsed when she reached us and we weren’t able to get her up on her legs again. The veterinarian who was called urgently to the Society determined that due to the horse’s extremely bad condition and the terrible pain she was suffering, it would be preferable to perform humane euthanasia.

The Society filed a complaint at the Israeli Police so that an investigation would be opened, and the details of the case were transferred to Dr. Deganit Ben Dov, the Supervisor of the Law for the Prevention of Cruelty to Animals in the Ministry of Agriculture.

We in the Society continue to take care of cases of abuse and neglect towards all animals at all times. We call on the public to be vigilant and to notify us of any case they come across at the phone number: *4553.