Two months ago the residents of Beit Aryeh woke up to a new reality in which their dogs began to disappear mysteriously. From inquiries and investigations that the dog owners carried out, it appeared that a policeman who lived in the settlement was picking up the dogs and throwing them into the Natouf Quarry near Modi’in without food or water, thereby sealing their fate. Three weeks ago two of the residents of Beit Aryeh turned to the Society for Prevention of Cruelty to Animals in Israel with a report on the matter. After a thorough investigation and a meeting with those who were making the complaint, all the details were made clear to the representatives of the Society.

The episode began when Milky, the beloved dog of Lee Elbaz, a resident of Beit Aryeh, disappeared. After searching and inquiring of the other residents, she was told that a policeman who lives in the settlement was seen picking the dog up into his private jeep and driving away. Lee went to the policeman’s home accompanied by family members, where she recorded the conversation on her cellular phone. During the course of the conversation Lee asked the policeman about the dog, and he admitted that he had picked up a dog that was wandering around the streets of the settlement and threw it into the Natouf Quarry. He claimed that within his authority as a policeman he was acting according to the law, which allows him even to kill the dog.

Lee and her family were shocked and they hurried to search for Milky, and after a few days they found the dog not far from the quarry. After that the family went to the Police Station in Mesubim and registered a complaint against the policeman for abuse of animals.

Lee, who was enraged by the words of the policeman, decided to open a group in Facebook against him and put out a petition calling for his dismissal from the Israel Police because of abuse of animals and taking the law into his own hands. In the wake of the police officer’s appeal to Facebook, the group was closed and Lee’s page in Facebook was blocked. Furthermore, the policeman himself signed the petition and wrote in the notes, distorting the meaning of the law for the protection of animals: “A municipal veterinarian, a supervisor or a police officer who goes to grab a dog, by the power of the authority invested in him according to the law, and if because of the behavior of the dog it is not possible to grab it without imminent tangible danger of injury to life or limb, to him or another, is permitted to kill it”. The petition was also signed by many residents living in Beit Aryeh whose dogs disappeared and after inquiries it was found that the policeman had a hand in the matter, and the dogs were found at the Natouf Quarry site.

In the middle of January a Labrador named Nila disappeared. It belonged to Zeev Leket, a resident of Beit Aryeh and a student of law. Leket went straight to the home of the policeman where he recorded his conversation with him. During that conversation the officer admitted that he was involved in the disappearance of the dogs in the settlement, but in this case he was not in the area for three days, so he knew nothing about what happened to the dog. Leket went out to search for Nila at the quarry, and began by asking questions of the workers at the site about the dog.

Leket decided that the situation in which a policeman becomes a sheriff and takes the law into his own hands is not acceptable, and together with Lee he turned to a few voluntary organizations that work for the welfare of animals, which refused to help them. On the edge of despair the two of them turned to the Society with a request for help, and in their complaint they stated that at the quarry there still were dozens of abandoned puppies and adult dogs in serious condition. 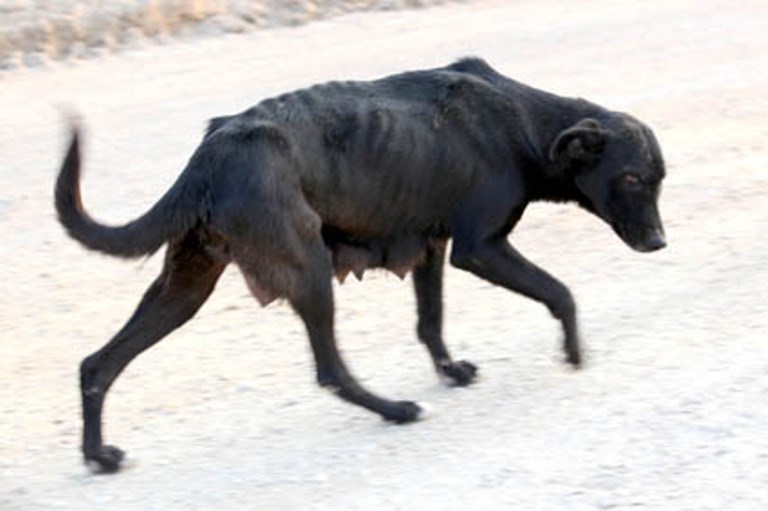 A team from the Society went out immediately to the quarry with veterinarians and additional workers with the goal of rescuing the dogs. After getting permission from the manager of the site, they began to search for them together with residents of Beit Aryeh who came to assist in the efforts. Little by little they discovered more and more emaciated dogs, among them two week old puppies. All the dogs were taken to the Society and were transferred immediately to the veterinary clinic.

In the words of Dr. Aya Perry, the Society’s veterinarian: “The condition of the dogs was extremely poor. The mothers of the puppies were in a severe state of malnutrition and they even refrained from eating, and their pups were having diarrhea and were in a very poor state of health, suffering from worms. The dogs are in quarantine and are under medical supervision, and the mothers are being kept alive by vitamins and fluids”.

These days the Society is working on the judicial and parliamentary fronts. The complaint registered with the police has been passed on to the Internal Investigations Department of the Israel Police, and we hope that that unit will bring the police officer to justice. Furthermore, a scathing letter was sent to the Minister of Internal Security, Yitzchak Aharonovitch, and an urgenty meeting was held on the matter with the Minister of Environmental Protection, Gilead Arden.

It is important to make it clear that a situation in which a person takes the law into his own hands is unacceptable, how much more so when we are speaking about a police officer. According to the law, a policeman has the authority to collect roaming dogs, but he must bring them to one of the municipal dog pounds and not abandon them in an isolated place.

The dogs that were gathered from the Natouf Quarry have gotten stronger over the last few weeks and will soon be eligible for adoption. We call upon the wide public to come to the Society, to adopt the dogs and to give them warm and loving homes. Moreover, we ask the public to be alert for anything concerning abandoned and suffering animals, and to quickly report any instance of abuse or neglect that comes to their attention.